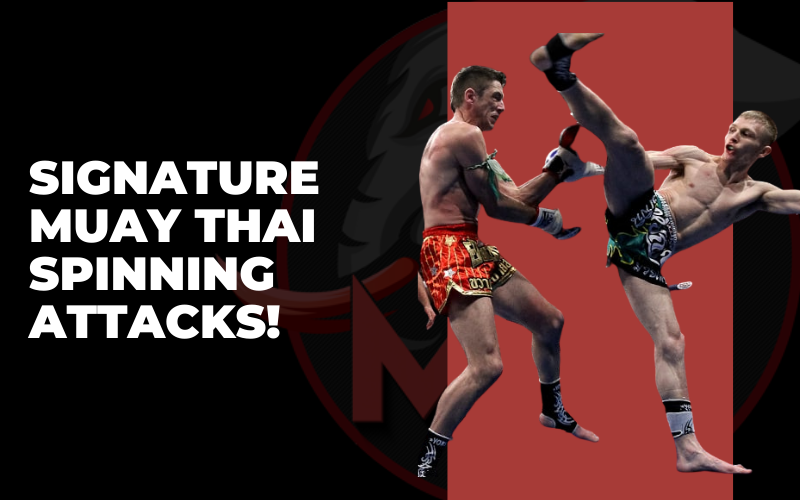 They’re highly entertaining, even if you don’t know how to throw them. Regardless of the method, they’re both fascinating to watch and attempt. Their frequency of landing and even knocking fighters out is compelling enough to argue that they are effective. So, let’s get into Muay Thai’s spinning attacks!

Let’s look at both of these approaches since both are alike. The spinning backfist/hammer fist is a move that you’ve undoubtedly seen before. As he spins around, the fighter extends their arm fully in order to aim for their fist with the opponent.

A popular spot is your opponent’s temple or jawline. You should ensure you go through the target and not just land on it. The only distinction between the spinning back fist and the spinning hammer fist is where your hand hits the surface. The rear of your hand is where a back fish occurs.

A spinning back fist can be difficult to land. When you spin, make sure your thumb is pointing upwards towards the sky or the ceiling when you throw. This will have you fall on the top of your knuckles.

When you spin your hand for a spinning hammer fist, keep your thumb toward the side. Your assault will fall on the side of your fist when you do this.

Consider this when determining which aspect of your technique you should focus on, more power or greater protection?

The spinning elbow is identical to the spinning back fist in terms of application. Spin until you reach your opponent and make sure not to just hit it. The spin can also leave you very close to your opponent, so be prepared to follow up or move fast. Clinching after this is also a viable strategy.

Now we’ll look at spinning kicks. The spinning back kick is perhaps the most recognized spin attack. It’s simple to execute, but it’s difficult to get right. Throw the technique you’re learning by stepping to the inside of your lead leg and turning around and throwing a sidekick. Don’t let the term spinning put you off; this is a turning kick, not a spinning kick.

The secret to both of these moves is to throw your own sidekick correctly without spinning first, which will make learning the technique more simple. This kick can be used on the body or head, but it is more effective at the body. This technique to the head may be highly ineffective yet very dangerous, with a high-risk, high-reward profile.

If you’re performing this kick with the right leg, you can also strike your opponent’s liver, which can really cause damage.

A spinning hook kick is a fighting style in which you throw your leg in an arc to land on the side of your opponent’s head. Instead of the rear kick, I suggest you utilize this method mostly to the head. Additionally, in terms of what spins there are, the name is correct since you should strive to go through your opponent when this technique lands.

It’s worth noting that this is a long-distance approach, and getting down the distance may be tough. Before attempting this method, you should learn how to execute a basic hook kick.

The Tornado kick, which is similar to a spinning roundhouse kick, is one of the most difficult kicks to execute. The move itself is simply a roundhouse kick performed after a step inside and spin.

The first thing you should do is walk into the circle with all the spinning methods. Then as you turn back around, pivot on your lead leg and bring up your trailing leg, when facing your opponent again, spring slightly and deliver a roundhouse kick with what was formerly your leading leg.

This is a tough maneuver for many nak muays to learn at first, so I advised training it bit by bit. The kick can be utilized to the body, head, or feet, and it’s a fantastic highlight reel move.

As with all techniques, spinning attacks comes with their own dangers. One of the dangers of spinning techniques is that you can easily spin right into your opponent if you’re not careful.

Another danger is that a lot of these techniques are long-range and so it can be hard to get them in properly. This means that you can leave yourself open for a counterattack if it misses.

A third danger is that a lot of these techniques are high-risk, high-reward. This means that they have the potential to do a lot of damage but also leave you vulnerable if they don’t land properly.

Muay Thai spinning attacks can be a great way to surprise your opponent and take them down. With the right technique, you can easily knock them out with a spinning back fist or kick. However, as with all techniques, there are dangers associated with using spinning attacks. Be sure to take these into account when using them!